This week, almost the whole team got hit pretty hard with a cold, slowing down the work pace quite a bit. Being sick is pretty bad, but being sick when you’re under a tight schedual is even worse. This sort of thing happens though, and luckily we have sort of more or less planned for it! 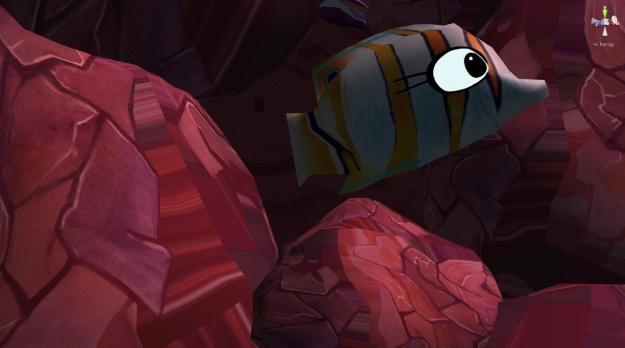 Here’s some of our individual blogs..

Evelina Foxberg, our producer and graphical artist, gives an introduction to the project

Sebastian(Designer, artist) writes about the core design pillars of nudibranch and how they work.

Erik (Lead programmer) gives a summary of the project!

Keep you eyes peeled on these blogs are they are updated weekly with content related to each team members field!

..Aside from that, here’s an overview of week three!

First of all, we have been working on getting a food system into the game where the player can pick up algaes, convert them to food, and feed fishes with said food. Food is the main way to improve your realtionships with your fishes so we felt that it was important to get that done. As of nowthe food system is roughly done, it does need some feedback though!

Emil also managed to squeeze in a food combination system that combines food into new kinds of food if the player so desires.

We also added texture and emotions to one of our fishes, mostly to test it! Here’s a fish quietly regarding the player. It’s not easy looking like a monster, you’ll have to gain the fish’s trust

Our Nubi also had an overhaul. The mesh was updated and polished upon, the animations redone to be more believable, and a new texture almost finished. I’ll throw in some pictures of that as soon as the texture is done! 🙂

We’ve also iterated upon our virtual joystick by having it be more sensitive and react to the screen size and resolution. Should feel better to use now! An UI bug is currently making everything a bit too white, we’ll have it sorted soon! 😛

That’s all for this week!

Welcome one and all to the official Dream Dust team blog, and to what will be the Nudibranch(working title) development diary.

We are making a prototype of Nudibranch in eight weeks, let’s do this! 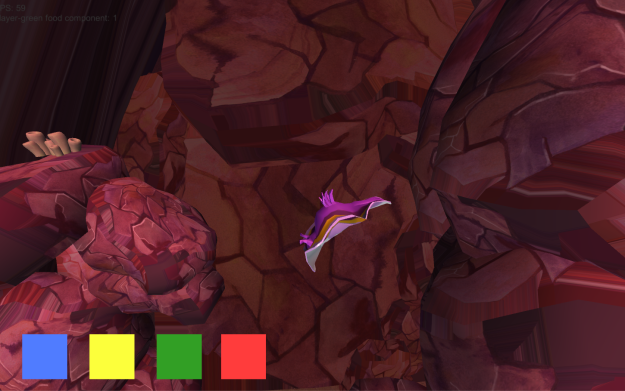 Who are you guys?

We are five game design students!

Two programmers, two graphical artists, and one designer. We spend our days making games in a makeshift office set up in our school.

So what are you making?

We are making Nudibranch! In short, Nudibranch is a smartphone game designed to help the player sleep better. The game is designed to be played during the evening before going to bed.

We plan to do this by providing the user with a safe environment to relax and have fun in, and by also rewarding consistent sleeping routines by giving the player new content for sleeping.

You play as a Nudibranch, a tiny seaslug found in sea environments. You mostly swim around in the ocean, collect algae, and interact with other creatures of the sea. Over time you become better and better friends with the creatures of the sea, and develop friendships that has fishes following around and accompanying you on your journey.

In short, it’s explorative gameplay without any real dangers. 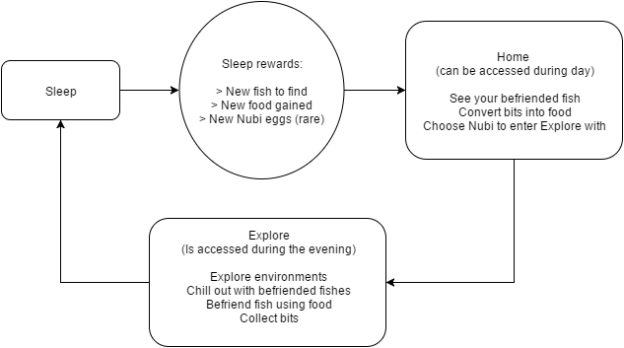 How far have you gotten?

We are currently at the end of week two of production. We are planning to have our first prototype finished after eight weeks total, so that’s six weeks from now.

So far we have spent a lot of time creating a backlog, defining our artstyle, performing various technical tests, building the base for the game, and documenting the design in a document.

Today, we pushed out our first prototype featuring basic movement, a rough visual overview, fishes with AI, algae to collect, and a food spawning drag-and-drop interface.

There’s movement and fishes and..that’s about it so far 🙂

What will be written here?

This is our official dev blog! Each Friday, I (Sebastian) will update it with a general post on what we’ve been up to, and link to each team member’s blog to show what they’ve been doing.

Our approach to this project is to test things, see how they work, and iterate based on that. From what we’ve sen there’s no other sleeping games out there, so this is a new field to explore for us.

That’s all for this week. See you soon!